Some Mistakes Were Made, by Kristin Dwyer 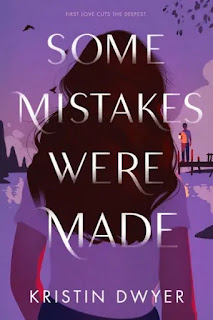 Ellis has refused to speak with Easton ever since Easton's mother Sandry sent her away to California.  Now, a year later, Ellis isn't sure that she wants to return.  But they have a long and complicated history (that takes the rest of the novel to fully explain), but in summary:  Ellis's parents largely abandoned her (her father was a repeat offender -- going in and out of jail -- while her mother routinely disappeared for weeks at a time, burning through child welfare payment on drinking binges).  Sandry, an old friend of the family, picked up Ellis and brought her home and raised her as a daughter.  Sandry provided a stable home and her family became Ellis's family (much to the anger and resentment from Ellis's people).  However, a codependent relationship between Ellis and Easton develops that while not really incestuous, proves to be wildly dysfunctional.

With a great attention to detail, Dwyer takes this tragic situation and untangles all of the complicated interactions that develop from it:  Ellis's troubled relationships with her parents, the maternal attachment of Sandry with Ellis, the class resentments between Ellis's extended family and Easton's well-to-do family, and of course between Ellis and Easton.  It's difficult reading because there are so many layers of pain and so much history in this situation.

The result is definitely a tear-jerker with some majorly poignant moments, with some beautiful character studies.  Dwyer definitely has a skill with showing how personalities play off of each other.  However, the story really failed for me for two reasons.  First of all, Dwyer's strategic decision to not explain the important elements of the situation (most notably why Ellis was sent away in the first place) until 3/4 of the way through the book might build up the drama but it leaves a huge gap in the story.  We know that people are upset and we know that Ellis did something horrible that got her kicked out, but without knowing even in broad terms what happened, it's frustrating to just see people blowing their tops all of the time with no real explanation.

All of which takes me to the second (and more critical) complaint: the shrill and melodramatic nature of the characters.  This is a classic depiction of codependency, with characters who blame each other for all of their woes and lack the ability to look inwardly.  It gets old and tired.  In the beginning, I was hoping for a breakthrough where someone would simply say, "You know what?  I need to start fixing myself!" But that doesn't happen.  Instead, we get endless drag down screaming matches where the characters relentlessly rehash gripes and grievances.  I get that everyone is hurting but with no one making an attempt to grow, I just stopped caring.  I feel bad about Ellis having shitty parents (heaven knows that I despise YA books about children trying to survive neglect!) but she's not doing anything to be an inspiration and I don't really see the point in reading a story about people who repeat their parents' mistakes.

Good writing, complex and insightful story, but with characters who did nothing to make me care about them.