A Girl in Three Parts, by Suzanne Daniel 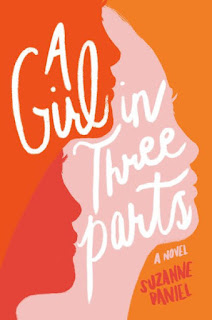 Allegra feels like she is torn into three parts.  Simultaneously being raised by her two grandmothers and her Dad, she has to tread carefully because, while they all love her, they cannot stand each other.

Her grandmothers couldn't be any more different as people.  Joy is fiercely independent "woman's libber" who helps shelter women fleeing abusive husbands.  Matilde is no less fierce, but rejects all of those notions, focusing instead on hard work, perseverance, and tradition.  Meanwhile, her Dad is a beach bum and largely out of the picture.

Allegra tries to find balance between them and wishes they would all get along.  There's some sort of historical reason why they hate each other so much but no one will share it with her.  But in the end, the three of them all surprise Allegra when she needs them most.

A period piece set in Australia in the 1970s that explores family and the different ways that people express love and loyalty.  The burgeoning of the second wave of feminism is the backdrop, but told through Allegra's twelve year-old perspective, this is a much more intimate story about growing up.

It has a less-than-stellar opening and a rushed ending, but the bulk of the novel is actually quite good.  The slow start can be blamed partly on culture shock and the lingo, but the real problem is the lack of proper exposition.  There's really no explanation for why Allegra is floating between her grandmothers' apartments and no indication of the period (until we are nearly half way through the book).  Aussie YA tends to be a bit thick, but this is even more so than normal.  Once we got through that, I really appreciated the vivid characters.