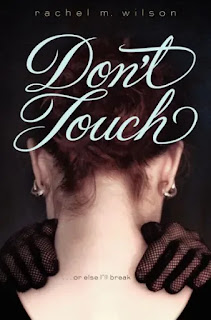 Caddie goes to great lengths to develop ways to help her cope with events seemingly out of her control.  When her father moves out of the house, she tells herself that as long as she can manage to not touch or be touched by someone, he'll eventually come home.  But he doesn't and this story she tells herself turns into an obsession and an uncontrollable fear of touch.  She wears gloves to school and goes to great pains to avoid having physical contact with her friends.  It is a hard act to maintain but the tension also lands her a star spot as Ophelia in her school's production of Hamlet.  Ophelia's struggle with maintaining her sanity comes too close to Caddie's own fight as she falls in love with the boy playing Hamlet.

Ophelia is a popular choice to probe the subject of adolescent mental illness and a story about a high school Shakespeare production where life mirrors art is not particularly new.  But Wilson does a good job with this familiar territory by providing a complex and sympathetic depiction of obsessive compulsion.  Caddie is bright and intelligent, well aware of her problems, but often overly optimistic about her chances of overcoming them. I was less taken with her alleged friends who, with the exception of the love interest, seemed cruel or indifferent.  While it undoubtedly adds drama to the story, the overall lack of respect for personal space and consent was disturbing.  Even for a person who did not mind physical contact, there was behavior depicted in the story that I found troubling.

Overall, this story of self-discovery and struggle with mental illness doesn't cover much new ground, but  features a sympathetic and intelligent heroine who finds peace with her problems on her own terms in a rewarding way.