How We Ricochet, by Faith Gardner 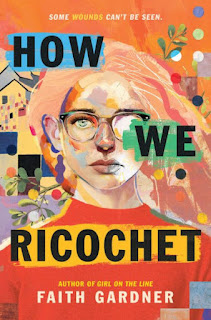 Life changed forever for Betty, her sister Joy, and her mother when an angry young man opened fire at the store where they were shopping in the mall.  None of them were physically injured, but Joy was nearby the shooter as he turned his gun on himself.

Driven by anger, Mom throws herself into activism, proving to be a charismatic and articulate advocate for the gun control movement.   As she gains attention, she drifts away from her family.  Joy, on the other hand, withdraws into her room, becoming a substance-abusing agoraphobe.  In between, Betty tries to hold the family together.

Trying to make sense of the whole thing, Betty becomes drawn to the shooter's younger brother, Michael (she vaguely knows him from school as they shared a class or two, but they were never friends).  Without letting on that her family were victims of his brother, she befriends Michael and (this being YA) the friendship starts to become romantic.  But becoming close with the shooter's family simply complicates the narrative she trying to form.  There are no explanations, just regrets and lost lives.

A sometimes dreary but ultimately positive story about making the most of what we have and letting go of the past.  The characters are all lessons:  parents who abandon the things that matter, a sister who destroys herself by refusing to let go of the past, and the child who achieves redemption by finding the good in the present and using it to build a better future.  The novel is well-written but it's not particularly inspiring except as a series of cautionary tales about how not to deal with problems.