The Boy in the Dress, by David Walliams (ill by Quentin Blake) 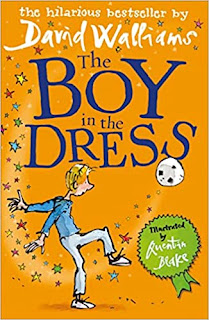 I was browsing the CCBC book sale, ran across this classic, and realized I had never actually read it (let alone given it a review).  Overrated as a pioneer transgender book for children, The Boy in the Dress is really a simpler story about a soccer-playing boy named Dennis who loves the way that dresses look and is curious about trying to wear one.  With encouragement from a girl in his class, he realizes his fantasy as she lets him try on her wardrobe.  She in turns gets him to wear it to school, where he attempts to pass himself off as her friend, an exchange student from France.  When things go awry, the headmaster expels him, preventing him from competing in their school's final soccer match.  In the end, his teammates come to his rescue with a hilarious solution and the match is saved.

David Walliams is a well-known comedian and the author of a series of children's books, but I know him better as the voice of Frog in Room on the Broom.  In its day, this book certainly raised eyebrows for its subject matter, but it's quite tame by contemporary standards.  Dennis never expresses any interest in being a girl, but simply enjoys dresses.  He attempts to pass as a girl mostly as a laugh to see if he can get away with it.  Most of the adult characters respond in the same way -- seeing it as simple curiosity without any assumptions about broader gender identity.  For more strident works for middle readers on transsexuality, I'd turn to something like Gracefully Grayson.

It's a pleasant book but, like its subject matter, it hasn't aged well.  The depiction of a conniving South Asian shopkeeper that is intended to provide comic relief peddles on stereotypes and borders on racism.  The ending that tries to tie everything up neatly by normalizing Dennis's desires tries too hard and lasts too long, but the sentiment is appreciated.  The numerous sketches from Quentin Blake will delight fans of Roald Dahl.