Someone I Used to Know, by Patty Blount 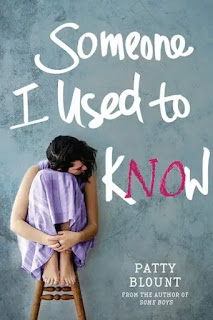 Two years ago, Ashley was a victim of rape.  Targeted by the school's quarterback, she was simply a goal in a "scavenger hunt" organized by the school's football team.  But almost worse than the trauma of the attack or the way that her community turned against her in the aftermath was the fact that her older brother Derek, as a member of the team, participated in the scavenger hunt.

An unflinching look at rape culture, this won't be a book that anyone will particularly enjoy reading, but that is not really the point.  It's a story intended to start a discussion and a dialogue about why sexual violence is so prevalent in our society.  If that's all it was, it wouldn't honestly be all that interesting of a book, but where this novel stands out is in its broader ambitions -- looking at the impact of Ashley's assault on her family.

There's the pain and incomprehension of Ashley's parents and her oldest brother's decision to come home and try to knit the family back together.  However, it's her complicated relationship with her football-playing brother Derek that takes center stage.  Derek didn't just play along with the "game" that got his sister raped, he was an active participant.  And during the trial of the rapist, he made some unfortunate statements that hurt the case.  For rather complicated reasons, Ashley is convinced that he sabotaged the trial on purpose.  But the truth runs deeper:  the two of them have a history of buried antagonisms that the assault brings to light in the worst of ways.

Harrowing stuff!  Originally published in 2018, this was timed to take advantage of the attention on  the #MeToo movement, but the fact that it is still topical (and probably will remain so for many years to come, if not forever) is comment enough.