The Sea Knows My Name, by Laura Brooke Robson 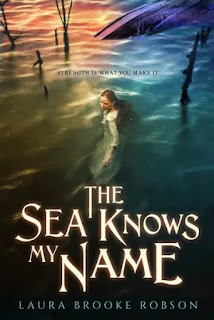 Thea was named by her mother Clementine after the goddess of reason.  Her hope was that Thea would avoid all of her mother's mistakes and set out to conquer the world on her own terms.  Clementine had once been a brilliant scientist, but when she predicted the volcanic eruption that destroyed their civilization, no one believed her until it was too late.  After all, she was only a woman and what would a woman know about science?  In the aftermath, men of violence took over and women quickly became nothing more than "commodities of reproduction." Angry at how patriarchy essentially had destroyed their world, Clementine made a pact to exact revenge.  She turned to piracy, sent Thea to a boy's school to get the only education worth having, and determined that Thea would be part of her plan.

But Thea doesn't carry her mother's skills or her anger.  She's soft, afraid to fight, quick to flee, and the opposite of her fiery mother.  She wants to be as strong of a person and earn her mother's respect, but her mother's ways are not her own.  And when she attempts to stand up to her mother, a tragedy strikes that causes her to question her self-worth altogether.  Between her fears, the certain knowledge that she's a disappointment, and her anxious desire to prove that she can be her own person, she sets out on one last voyage to fix everything that has gone wrong.

A beautifully written fantasy novel that is more of a metaphor for the adolescent search for identity.  Not every teenage girl will have a pirate queen for a mother or will fight off boys with guns and swords, but Thea's struggle with her Mom over her future and her frustrations with being objectified and marginalized by men will resonate with many young readers.  This is an unusual fantasy novel.  It's a very dark story with a slow pace and it won't appeal much to people who want action and adventure. Much of the story is really about Thea's physical survival and her ruminations about how she got to this point  However, as a coming of age story, this is really an extraordinary read with a lot to say about growing up female.  Highly recommended.