A Cuban Girl's Guide to Tea and Tomorrow, by Laura Taylor Namey 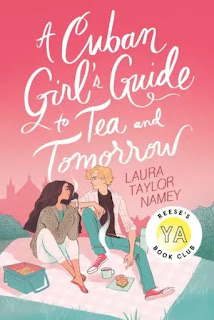 After Lila suffers the trifecta of losing her beloved grandmother, being abandoned by her best friend, and being dumped by her boyfriend, she's lost.  Yes, she'll always have Miami in her heart and Cuba in her soul (as well as her abuela's love of the kitchen), but none of it makes any sense.  Her family, panicked at her existential crisis, take desperate measures and send her to spend the summer with family friends in Winchester, England.

With its cold gray weather and its complete lack of Cuban culture, Lila hates England and feels even more out of place.  But she slowly rediscovers herself by introducing the people there to the fine art of Cuban cooking.  A cute boy from a local tea shop and his troubled little sister also help as well.  By the end of the summer, Lila realizes that she has the potential to be much more than she ever knew before.

Cute romance that pushes most of the right buttons, but gets fussy at points and thus misses the mark for me.  Like most books centering around food, it struggles with how to convey the glory of its cuisine.  Namey's choice is to mostly have characters gushing about how wonderful everything is.  That only goes so far before it becomes repetitive and boring.  I get the point (everything this girl bakes is amazing) but I didn't believe it.

There are problems with the central character as well:  for all of her troubles, Lila definitely does not suffer from low self-esteem.  You know with that set up that she'll get humbled a little and do some growing from the experience, but it doesn't really happen to any serious extent.  She's just arrogant and obnoxious throughout.

Finally, there just isn't much going on here.  There ought to be some drama (for example, in having to choose between Miami and England) but nothing really develops.  In a super happy ending, everyone else ends up accommodating for Lila.  Sure, she's calmed down a bit but she's still living the same charmed existence that she started out with.