Before Takeoff, by Ali Alsaid 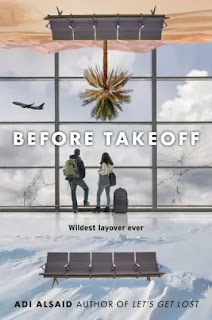 James and Michelle are two strangers, stuck at Hartsfield-Jackson International Airport (ATL) when their flights (and in fact every other flight) are delayed.  It's a common enough story until they discover a strange blinking button on the wall and decide to push it.  Suddenly, the laws of the universe change.  It starts snowing in Terminal B but becomes unbearably hot and humid in Terminal C, where a jungle sprouts up.  Terminal F becomes a small microcosm of the world, with passengers breaking off into national identities that match their original destinations. As the delays continue (this being Delta, no flights ever get cancelled), people start disappearing, mobs of zombies appear, and strange monsters lurk.  Terminal C's Sky Club is taken over by the Diamond Medallion frequent flyers and they set up their own oligarchy.  Earthquakes and sudden death abound.

It all eventually ends, but not in a way that is particularly satisfying or meaningful.  Cutting to the chase, I found the novel pointless and normally would never have finished it -- if it wasn't about an airport that I know like the back of my hand.  And the author seems to know it pretty well also, except for the strange decision to describe massive windows everywhere (a mistake also featured in the cover -- which looks more like Detroit).  After all, the one very defining characteristic of ATL (and indeed ATL's most terrifying characteristic under normal circumstances) is its lack of windows.  It is a terribly claustrophobic airport.  For some reason, while Alsaid spends a lot of effort making up terrors, he skips past the one that is inherent to the airport -- the lack of windows.

So, why did I read a book I hated so much?  At first, I enjoyed all the details and the pleasure of recognizing the landmarks.  Throughout, I occasionally enjoyed the clever in-jokes ("fresh" sandwiches and salads, that SkyClub takeover, the patchy airport WiFi, etc.).  As we raced through larger and larger catastrophes, I kept hoping the pointless violence and high body count would amount to some sort of clever ending, but it never comes.  Alsaid proudly calls this a "weird trip of a book" but you need something more than weirdness to create a book worth reading.  And this flat out fails to deliver.