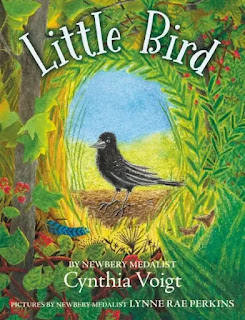 Little Bird is a crow who has struggled because of her diminutive size to get the rest of the crows to respect her.  But when the flock's Our Luck, a human's necklace and their protective talisman, is stolen from the nest where it's kept, Little Bird vows that she'll find it and return it.  Facing unfamiliar dangers (including other crows, hostile birds, cats, and humans), Little Bird spreads her wings on a life-changing odyssey.  Crows are clever and intelligent birds and Voigt tries to capture the mixture of wisdom and bafflement with which Little Bird explores the world.

The quirky premise attracted me to this book, but its overall tone and approach of the story seemed inappropriate for its target audience.  This is a dark story that is full of animal imperilment and features a number of complex issues.  In other words, this is not a sweet animal story, but rather something fairly mature.  It isn't so much that I think it will traumatize young readers, I just can't see them really enjoying its somber mood and complicated themes.  As for myself, it just didn't have much charm.  Dana Lorentz's Of a Feather is a much better bird story and does a better job of explaining bird behavior than the rather superficial look at crows that this novel provides.