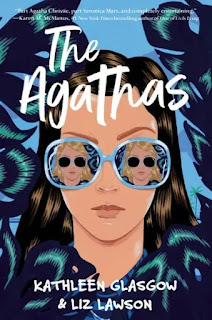 Alice is a girl with a scandal in her past.  Last summer, she disappeared, setting off a huge manhunt, before reappearing a few days later.  Her little stunt cost her her credibility and a lot of friends. In contrast, Iris is a girl with no history.  No one notices her.  She's bright and intelligent but off of everyone's radar.  The two of them are thrown together when their guidance counselor decides that Iris would be the perfect tutor for Alice.

And then in an eerie repeat, a girl named Brooke disappears.  Brooke was once Alice's best friend but the girls were split apart when Brooke stole Alice's boyfriend.  And it is at a Halloween party, where Alice confronted Brooke that the latter girl disappeared.  But it was Iris who saw Brooke fleeing the party and was probably the last person to see her.

When Brooke's body turns up dead, Alice and Iris discover that they  share a fascination with mystery and solving crime.  And they also find that the deeper they go into investigating what happened to Brooke, the more the grownups around them seem to want to stop them.

Through a fabulous series of twists and surprises, the adventure never stops as these two teen sleuths (with an immense debt to Agatha Christie) solve true crime.  I've never been much of a fan of detective novels, but I have to admit I thoroughly enjoyed this one.  I think most people will.  It's already part of a series, so there's more out there if you want it!