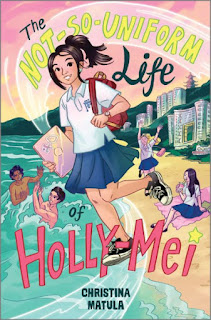 Holly-Mei has a bad habit of speaking rashly and getting herself in trouble.  And when she gets her whole class in trouble, she makes herself persona non grata.  So, when Mom announces that she is being relocated to Hong Kong for work, Holly-Mei actually feels a sense of relief.

Sure, a new place can be strange and scary, but it will also mean a fresh start!  Holly-Mei is excited, even if she has to leave his beloved grandmother behind. It is her grandmother who warns her that moving won't be easy and she'll experience some tough times even if things work out in the end, but Holly-Mei can't imagine it will be worse than things are for her now.

Hong Kong does provide a fascinating change of scenery, but Holly-Mei learns that kid are pretty much the same everywhere and that she still needs to watch what she says aloud.  More so, because in China, families are judged by the behavior of their members.  Now Holly-Mei's mistakes won't just be her own problem, they could also affect her parents.

The cultural details of this book are its strength. The author, who spent fourteen years living in Hong Kong, delights in sharing her favorite parts of the city and readers will enjoy learning about the fun things one can do there.  I'm less taken by the story (which felt superficial) or the characters (who seemed spoiled and privileged).  Holly-Mei and her friends are rich (in the chauffeur, private yacht, and fancy penthouse level of wealth) and while she is mildly aware of being slightly lower on the totem pole than her friends, she lives a pretty exalted life.  This isn't Hong Kong as most of us would experience it and that makes the cultural details less interesting than they might have been.